Our client, Robert, is freed from prison 15 years early after a lengthy court case in federal court. Attorney Sydney Strickland explains how we got him out, and Robert describes how it feels to be free. 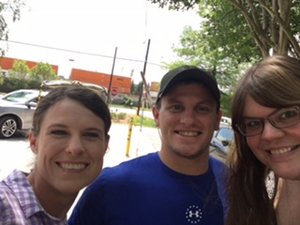 J.S. with Strickland Webster attorneys, Sydney and Leigh Ann, a week after we secured his release from custody.

J.S. was tried and convicted of aggravated assault and aggravated battery in Monroe County, Georgia, after a fight at a Waffle House.  J.S. was initially sentenced to 10 years in prison and 10 years of probation.  Strickland Webster began representing J.S. during his Motion for New Trial, shortly after his trial.  We presented extensive evidence on his behalf, and on appeal, the Georgia Court of Appeals agreed that J.S.’s convictions must be vacated, due to improper jury instructions and the ineffective assistance provided by J.S.’s trial lawyer.  We negotiated with the DA’s office for J.S. to enter a plea that allowed him to be immediately released from custody.  Read the appellate decision here.

Our client T.W. was charged with crimes stemming from a shooting. It was clear that the shooting resulted from a dispute over a girl. Due to the lack of evidence connecting our client with the shooting, the State decided last minute to try make the shooting gang-related. The State introduced evidence from a gang expert, but the State had not provided any notice of that expert to defense counsel, which is not allowed under the Rules of Evidence. When defense counsel tried to cross-examine the victim about the gang issues that the State said motivated the shooting, the State objected and the Court refused to allow defense counsel to ask those questions. He was convicted after trial and sentenced to 20 years to serve. We were appointed to represent him at the motion for new trial stage and on appeal. The Court of Appeals held that both of these decisions were improper and vacated our client’s convictions. Read that decision here. After the Court of Appeals’ decision, we got the judge to agree to order that he be released immediately.

The federal government charged M.M. with fraud related to the Paycheck Protection Program (“PPP”). M.M. is a legitimate business owner who used the PPP funds for business-related expenses. After we conducted an extensive investigation, we presented M.M.’s case to the government, which then agreed to dismiss all charges against M.M.

M.D. was charged with crimes relating to the sale of marijuana and firearms, and also with charges related to an attempted robbery committed by a codefendant. M.D. admitted that he was selling marijuana and firearms, but denied that he knew about the robbery in advance of the robbery. After significant investigation and consulting with experts, we convinced the government to dismiss the charges related to the attempted robbery, which carried at least 14 years in prison. As a result, M.D. was sentenced to time served, and is now home with his family.

The State tried J.A. for participating in a heist of an ATM filled with cash. At trial, due to the lack of evidence that it had connecting J.A. to the crime, the State introduced J.A.’s prior convictions from over two decades before the heist. J.A. was convicted at trial and sentenced to life without parole. We appealed his conviction, arguing that the prior convictions should have never been admitted. At first, the Court of Appeals affirmed his conviction, but we kept pushing and petitioned to the Georgia Supreme Court, which eventually told the Court of Appeals, in essence, to try again. On remand, the Court of Appeals vacated our client’s life without parole sentence, and he was released from custody. Read the final opinion here.

At trial, A.S. presented a self-defense theory, and in response, the State introduced evidence of basically every bad thing he’d done in his life. As a result, the jury convicted him of felony murder and other associated crimes. We represented A.S. on appeal to the Georgia Supreme Court, which held that the other evidence was improperly introduced at trial. Therefore, the Court vacated our client’s convictions. Read the Supreme Court’s opinion here.

A.A. was convicted of various crimes associated with his operation of the Hindu Temple of Georgia and sentenced to 327 months in custody. On appeal, we successfully argued that the government had failed to prove most of the crimes with which he was charged and that the district court had improperly calculated his sentence on the remaining counts. Read the opinion by clicking here, and check out an article from the Atlanta Journal Constitution here.

B.J. was convicted and sentenced to 55 years in prison. His convictions were affirmed on direct appeal, and his habeas petition was denied. We represented B.J. on appeal to the Georgia Supreme Court, which vacated two of his convictions. Read the opinion here. We represented B.J. on remand to the trial court, which reduced his sentence from 55 years to 15 years. B.J. is now home with his family.

M.W. petitioned the trial court for retroactive first offender status, so that he could remove his sole felony conviction from his record. We represented him on appeal, and argued that the trial court failed to conduct the correct analysis to determine if he was eligible for retroactive first offender status. The Court of Appeals vacated the order denying his petition and remanded for further proceedings. Read the opinion here.

F.J. was convicted and sentenced of charges related to tax fraud in the Northern District of Georgia.  We were of counsel to his attorney during his appeal to the Eleventh Circuit Court of Appeals.  On appeal, the Eleventh Circuit agreed with us that the district court had improperly calculated his tax loss amount and remanded for resentencing.  Read the opinion here.

R.B. represented himself at trial, after which he was convicted and sentenced to 25 years to serve in prison.  He was deemed ineligible for parole.  We represented R.B. in his direct appeal, and convinced both the State and the court that he was entitled to a new trial because he was never adequately informed of the risks of proceeding pro se at trial.  See the trial court’s order granting R.B.’s motion for new trial here.

C.F. represented himself at trial and was convicted and sentenced to prison. The Court of Appeals reversed his convictions after we argued that the Court’s decision to allow him to represent himself was not knowing and voluntary. Read the Court of Appeals opinion here.

N RE L.M., BOARD OF IMMIGRATION APPEALS

L.M. applied for cancellation of removal, but the immigration judge determined that a prior conviction for failing to pay child support, called child abandonment in Georgia, barred him from relief.  On appeal to the BIA, we argued that because the crime of child abandonment in Georgia was not like the crimes of child abandonment and neglect in other states, L.M. was not actually barred from applying for cancellation of removal.  The BIA agreed with us and remanded the case for further proceedings.  Read the BIA decision here.

D.B. filed a federal petition to challenge his state convictions. The district court found that the petition was untimely based on its consultation of the online state court docket without giving D.B. the opportunity to respond or providing any information about the state court docket that it had consulted. The district court also used the wrong date to determine when the statute of limitations ran for filing the federal petition. On appeal, the Eleventh Circuit agreed that this was improper and vacated for further proceedings. Read the opinion here.

R.P. was convicted of trafficking methamphetamine, despite a startling lack of evidence against him, and sentenced to 30 years in prison. On appeal, the Court of Appeals agreed that there was insufficient evidence to convict him, and we were able to get him released from custody within days of receiving the opinion. Read the opinion here.

J.K. was convicted of computer trespass after allegedly altering his boss’ e-mail settings to forward to his personal e-mail address. The Court of Appeals initially affirmed his conviction while J.K. was represented by other counsel, but after we began representing the client, the Supreme Court agreed to hear the case and then reversed his conviction, concluding that his alleged actions did not meet the elements of the computer trespass statute, as charged. Read the opinion here, and media coverage of the opinion here and here.

After a two-week trial, J.L. was convicted on a variety of counts and sentenced to 100 years, with 50 to serve in custody. We litigated J.L.’s motion for new trial and appeal. On appeal, the Court of Appeals agreed that the trial court had deprived J.L. of a fair trial when it allowed the State to introduce four separate gang experts to testify about a wide variety of matters, but then refused to qualify J.L.’s proposed gang expert as an expert. The Court agreed with us that preventing J.L. from putting up this crucial testimony meant that J.L.’s Gang Act charges had to be vacated. Read the opinion here and news coverage on the decision here.

After trial, R.L. was convicted and sentenced to 25 years in prison. The Court of Appeals agreed with us that the State had failed to prove two of the counts against him—resulting in an eight-year reduction in his sentence. Read the Court of Appeals’ decision here.

IN RE E.B., BOARD OF IMMIGRATION APPEALS

E.B. is an Ethiopian national who fled to the United States after being arrested and beaten because of her political activity.  She applied for asylum so that she would not have to return to Ethiopia, but in Atlanta, one of the nation’s harshest immigration courts, she faced an uphill battle.  Prior to hiring Strickland Webster, her application for asylum was denied by an immigration judge three times, appealed to the Board of Immigration Appeals (“BIA”) twice, and remanded from the Eleventh Circuit twice.  We appealed the latest denial of her application of asylum to the BIA, and much to our relief, the BIA sustained the appeal and ordered that E.B. was eligible for, and deserving of, asylum.  Read the BIA decision here.

J.H. entered a plea in the Superior Court of DeKalb County that was going to require him to serve several months in jail.  After he retained Strickland Webster, we were able to postpone his scheduled reporting date and to negotiate with the prosecutor so that he could withdraw his plea and enter a nolo plea to a misdemeanor.  With credit for time served, J.H. was not required to serve any additional time in custody or to be on probation.

At trial, A.S. presented a self-defense theory, and in response, the State introduced evidence of basically every bad thing he’d done in his life. As a result, the jury convicted him of felony murder and other associated crimes. We represented A.S. on appeal to the Georgia Supreme Court, which held that the other evidence was improperly introduced at trial. Therefore, the Court vacated our client’s convictions.